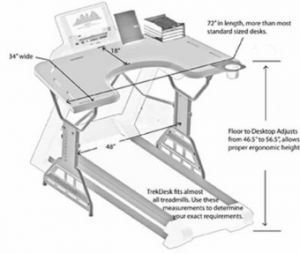 I saw my first standing desk + treadmill combo a few years ago in a friend’s office. He and his brother had both switched over to such a setup after reading about it online, and were now averaging six miles or so a day of slow-paced walking while on their computers. I thought it was pretty neat, although a bit impractical as far as space needed and costs incurred (they had developed their own solution instead of buying a pre-built model online).

Nowadays the cost has come down, and more and more people are giving treadputer setups (as they are commonly called) a chance. There are some things you should know before switching over though, especially if you are coming straight from a sitting desk setup:

Although you can use any treadmill with enough modification, the easiest thing to do is to buy a model suited for this type of setup. The one my friend bought was the Treaddesk, available for a cool $820.00 on the maker’s web site (although they can be had for as little as $500). They also sell adjustable height (electric) standing desks in a variety of shapes and finishes (update February 2018: Traddesk.com site down, link removed).

PC World magazine has an article on the step-by-step process one person went through in setting up and using their treadputer. The guy walks between eight and nine miles a day while at work now.

Lifehacker even had a competition over the coolest work desk setup and chose a treadputer desk as their winner. The man in question has lost over thirty pounds, which he attributes to his new work style.

This entry was posted in Standing & Working Tips. Bookmark the permalink.