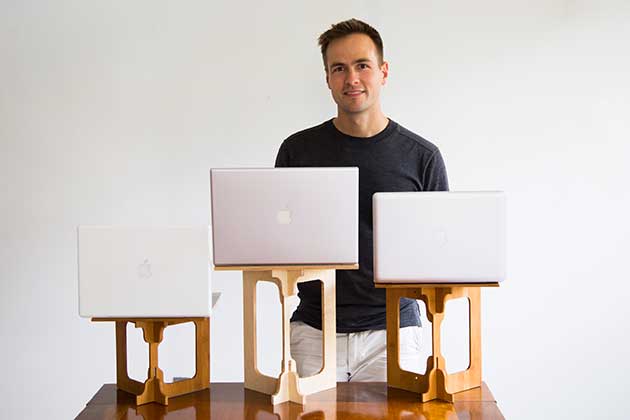 Standing desks aren’t a viable option for some of us–especially those that travel a lot (such as myself). I have a standing desk at home, but weighing in at almost 200 lbs. it doesn’t travel very well. So what is one to do when on the road? There are a few options when it comes to portable standing desks, including my tried and true method of stacking hotel desk drawers on top of each other, or using the ironing board as a workspace.

But what if you want something a bit less destructive and a bit more aesthetically pleasing? That’s where StandStand comes in.

A relatively new product in the world of Sit/Stand desks, the StandStand was invented by a young Harvard professor by the name of Luke Leafgren as a way to avoid sitting without the investment and bulk of a full fledged standing desk. Designing th first prototypes himself, he soon had a viable product that gained a bit of publicity through its wildly successful Kickstarter campaign.

The design is very simple and quite sturdy–it’d take some real effort to break this thing. The Made In The USA 7-layer birch wood construction is strong enough to hold the weight of nearly 1,000 pounds (just in case you have a REALLY old laptop).

The price is $69 for the original birch wood version and $99 for the more sustainable (and better looking, in my opinion) bamboo version. It comes in your choice if three heights–9 inches, 12 inches, or 14 inches (the taller you are the taller StandStand you should buy). One may thing it’s a bit steep for three pieces of interlocking wood, but they look nice, compact easily, and do the job. Sure, you could continue piling books up on your desk to raise up your laptop, but for those of us that travel extensively this could make things a lot easier.

For a minimalist such as myself I worry a bit about the thickness and weight. It’s not that it is particularly thick OR heavy (about 2 lbs and just over an inch thick when folded up), but I couldn’t see myself including this in my already cramped 44L backpack for an extended trip. If I was going on a shorter trip, or bringing a larger suitcase, it’d be on the packing list for sure.

As far as competition goes, there are more and more alternatives coming out as of recent months, proving that people are fed up with sitting all day. There’s the Ninja Standing Desk (that hangs on the back of a door),  ZestDesk (a bit more area but less portable), and then there’s the StorkStand (velcros the the back of a chair). StandStand is definitely the least expensive, simplest option if you want to prop up your laptop while on the road though. (Although it is important to keep in mind that this solution does nothing to raise the screen to eye level, as ZestDesk and Ninja Standing Desk do, so you will still be craning your neck downwards while using the StandStand.)

I wonder if some sort of hybrid version could be produced using a thinner, lighter material, such as aircraft aluminum (similar to what my favorite notebook stand, AViiQ, is constructed of). I’d definitely be up for such a product if anyone cares to invent such a thing…

Find out more about the StandStand desk, including option for purchase, over at the official web site.

Note: The company that manufacturers StandStand desk sent me a sample of their desk to assist me in writing this review.

This entry was posted in Standing Desk Reviews. Bookmark the permalink.